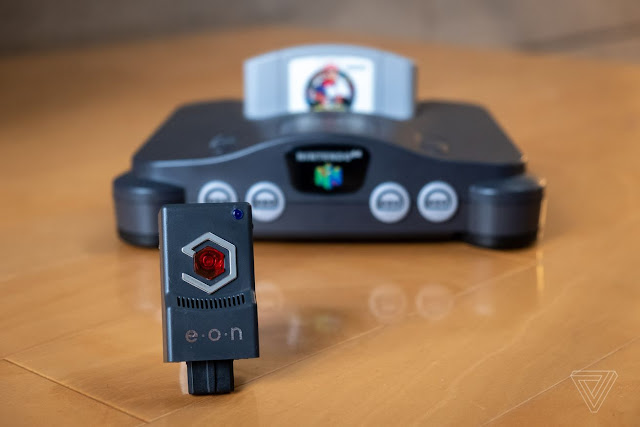 In hindsight, the Nintendo 64 was a pretty weird system. The controller was weird, the decision to go with expensive cartridges was weird, and the internal hardware was in a weird place where early texture filtering was possible even though storing and displaying detailed textures was not. It hasn’t aged well, exactly, but it’s aged interestingly — you can recognize an N64 game a mile away.

Out of all of Nintendo’s home consoles, then, the N64 is arguably the one where it makes most sense to play on original hardware, particularly as many of its best games aren’t available on modern platforms (GoldenEye 007) or just don’t feel the same without the original controller (Super Mario 64). And while you could hook up four knockoff joypads to a PC to run an emulated version of Mario Kart 64, it wouldn’t be quite the same experience as the real console.

The problem is how to play one on a modern TV. The N64’s notoriously poor video output exacerbated the characteristically blurry graphics even at a time when you could easily hook one up to a TV, which isn’t the case today. The system outputs S-Video, which is found on barely any contemporary TVs and looks pretty bad, or composite, which is found on a few more TVs but looks even worse. (I’m not even going to get into RF.)

This is the problem purportedly solved by a new third-party adapter called the Eon Super 64. I’ve been testing it for a while, and although it’s an expensive solution, it works well and is much easier to use than other options out there. 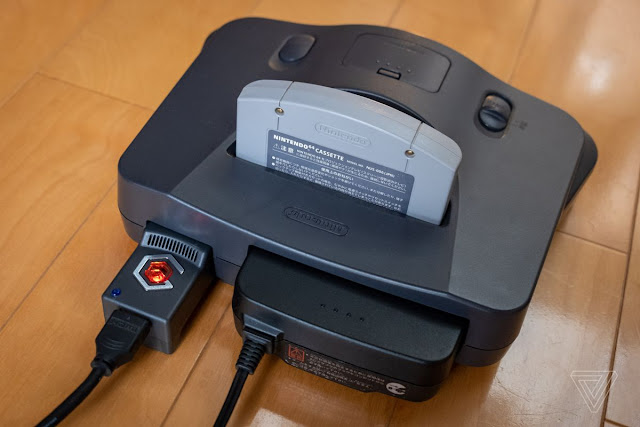 The Super 64 plugs right into the N64’s video-out port, replacing it with HDMI. It feels well-built and generally matches the N64’s aesthetic, with a chunky red Eon logo LED that lights up when the system is switched on. All you need to do is hook up an HDMI cable from the Super 64 to your TV and you’re away. (One caveat: it doesn’t work with PAL consoles, so N64 owners in Europe, Australia, and certain other regions are out of luck.)

The Super 64 takes the N64’s 240p or 480i S-Video signal and uses hardware to upscale it to 480p while tuning the colors and brightness. There’s also a dedicated button on the top of the unit to activate “Slick Mode,” which smoothes out the final image.

YOU CAN MAKE OUT ACTUAL PIXEL EDGES

While I wouldn’t call the Super 64’s 480p video output pin-sharp, when viewed on my 4K TV from couch range it’s surprisingly clear. There’s only so much you can do with upscaled S-Video, and I was happy enough to be able to make out actual pixel edges rather than the blurred mess I’ve seen every other time I’ve played an N64 on a flat screen. Colors look great, there’s no discernible lag, and games benefit from crunchy, authentic output.

If actual pixel edges and crunchy output aren’t your thing, then Slick Mode does a pretty good job of approximating anti-aliasing. It works well with text in particular, making things a little more readable, but overall I preferred to leave it switched off. The one thing the N64 doesn’t need is blurrier graphics — the sharpness of the Super 64’s rendering is, to me, its main selling point.

Here’s a press image from Eon that I would say does an accurate job of demonstrating the Super 64’s output: 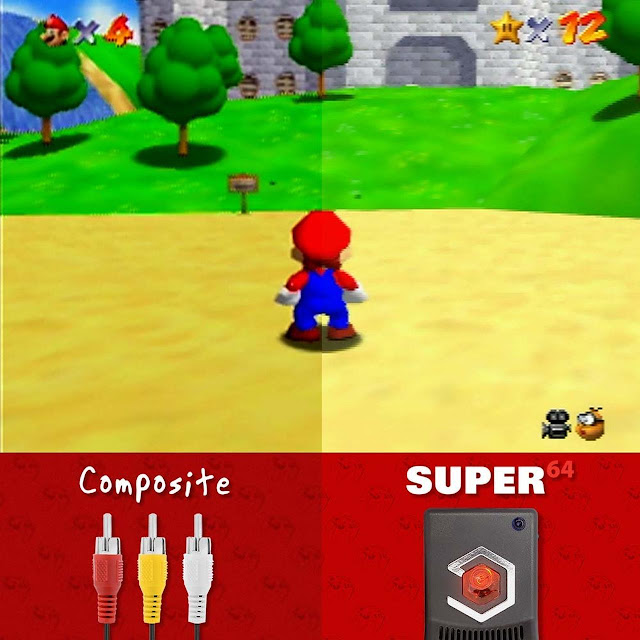 The Super 64 isn’t the only way to get your N64 working on a modern TV. You could pick up a Nintendo S-Video cable, though you’d likely also have to get an S-Video-to-HDMI converter depending on your TV, and the results probably wouldn’t be as good — you’d be likely to run into input lag and dimmer colors.

There are more effective options, but they mostly involve modding the system itself. RetroRGB is a great resource for this kind of thing, as well as retro hardware information in general. Basically, if you crack the console open you can unlock RGB output with a little bit of soldering, which allows you to get better-than-S-Video image quality through a SCART cable (and again, probably a SCART-to-HDMI adapter.) The next level of hardcore is a full-on upgrade board called the UltraHDMI that captures a digital video signal up to 1080p before it’s converted to analog, resulting in the sharpest image possible.

None of these options are particularly easy or cheap, but while the Super 64 is easy, it definitely isn’t cheap at $149.99. That’s about five times as much as I recently paid for an N64 itself along with three games. It’s a lot to swallow for something that isn’t necessarily the highest quality option.

But hey, time is money. The Super 64 is unabashedly a premium product that does exactly what it claims to do, and it’ll save a ton of hassle for anyone who just wants their Nintendo 64 to display anything on their modern TV with minimal fuss. If you’re in that niche, I can recommend it.