Glowing catsharks that lurk the briny depths have a fluorescence mechanism never seen before in another organism. And that glow could be conferring some serious perks - such as the ability to pick out other sharks among the many fluorescent things on the seafloor.

"Studying biofluorescence in the ocean is like a constantly evolving mystery novel, with new clues being provided as we move the research forward," said biologist David Gruber of City University of New York.

"After we first reported that swell sharks were biofluorescent, my collaborators and I decided to dive deeper into this topic. We wanted to learn more about what their biofluorescence might mean to them."

Evolution is a funny thing. Animals that are very different from one another can end up doing the same cool tricks. This phenomenon is called parallel evolution, and it can be fascinating to observe.

Many animals fluoresce, including frogs, scorpions, chameleons, turtles, and a whole plethora of sea creatures. But somehow the majority of them evolved the mechanism in the same way - by producing green fluorescent protein (GFP), proteins that are very similar to GFP, or fatty acid binding proteins (FABP).

(You may also be interested to know that your bones are fluorescent, too, due to proteins in the collagen - we just don't normally see it because our bones are decorously wrapped in flesh.) 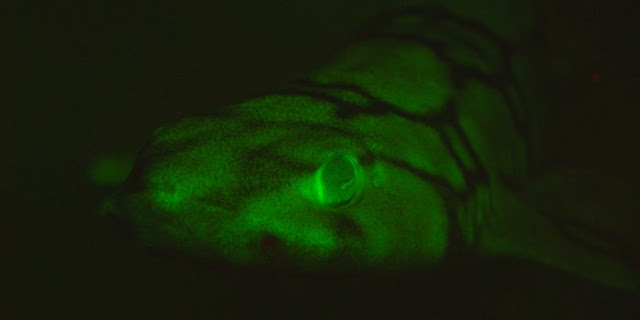 But in two species of catshark - the chain catshark (Scyliorhinus retifer) and the swell shark (Cephaloscyllium ventriosum), both of which are dappled with light and dark patterns - the biofluorescent glow is produced by a chemical pathway not seen in any other animal.

Rather than any of the mechanisms listed above, the sharks' glow is produced by brominated tryptophan-kynurenine small-molecule metabolites, found only in the lighter parts of their patterned skin.

In other vertebrates, small-molecule metabolites like these are involved in the immune system and the central nervous system. They're also known to be fluorescent… but, as we mentioned earlier, so are human bones, so that fact alone doesn't mean much.

But in the sharks, these metabolites in their skin help produce fluorescence in low-light conditions on the seafloor. This is invisible to the naked human eye, which is why the fluorescence wasn't discovered until 2014; but the sharks' eyes can see it.

They channel that fluorescence through their scales, or denticles, which appear to be structured specifically for the task, so that they gleam with re-emitted green light.

Because it's a different chemical pathway from those used by other marine animals, researchers think it might potentially be like a secret visual language only the sharks can understand - helping them hunt and mate.

"It's a completely different system for them to see each other that other animals cannot necessarily tap into," said chemical biologist Jason Crawford of Yale University.

"They have a completely different view of the world that they're in because of these biofluorescent properties that their skin exhibits and that their eyes can detect."

It's possible that the metabolites also help keep the sharks healthy. The researchers observed that the sharks seemed unusually clean, without any biofouling or growth on their skin.

Although sharkskin is well known for its anti-fouling properties, both species of catshark in this study spend a lot of time in the sediment, which contains more bacteria than the water column. So the researchers set out to identify what role, if any, the metabolites play in keeping the sharks clean.

This could indicate that the fluorescent molecules have some antimicrobial properties - although, of course, further research would help elucidate that.

"Sharks are wonderful animals that have been around for over 400 million years. Sharks continually fascinate humans, and they hold so many mysteries and superpowers," Gruber said.

"This study highlights yet another mystery of sharks, and it is my hope that this inspires us to learn more about their secrets and work to better protect them."