Findings are important step in better understanding what's creating these powerful signals, where they're from 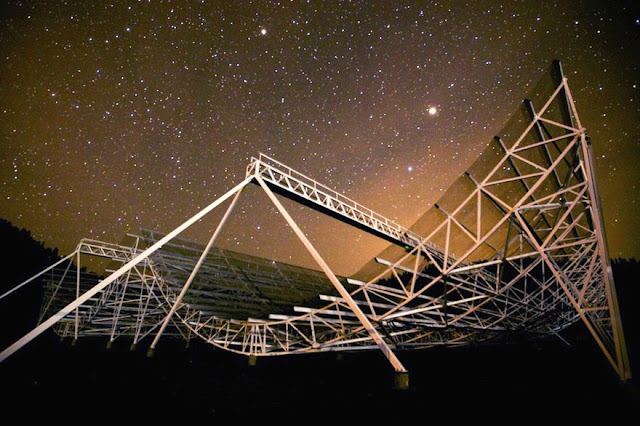 They're called fast radio bursts, or FRBs, and these odd, fleeting signals from space are shrouded in mystery. But thanks to Canada's largest radio telescope, astrophysicists are discovering more of them in their search to learn what makes these objects tick.

The first FRB was discovered in 2007 by an astrophysicist and his student while going through 2001 data collected from the Parkes Observatory in New South Wales, Australia. Since then, dozens more have been detected. As to what is causing these signals, scientists have yet to learn.

But these brief signals that are crossing the universe — and last only a millisecond or so — had another surprise: some of them repeated.

The first of these repeaters was discovered by McGill PhD student Paul Scholz in 2015. A second one was discovered last January. And the list is getting longer.

The findings are an important step in better understanding what is creating these powerful signals and where exactly they're coming from.

"The first biggest conclusion [from the paper] is that this is not an anomalous phenomenon. This is for real," said Victoria Kaspi, an astrophysicist at McGill University and the Canadian Institute for Advanced Research (CIFAR). "It just takes time and patience to find them. And two, it offers the opportunity to localize them, and that's huge in the FRB field."

The CHIME instrument cannot be both sensitive and precise in its detections, which means it cannot localize the signal. Instead, its job is to find as many as it can. Determining their exact location is up to other telescopes.


"Discovering eight sources like this is so important because it says we have a lot more repeating FRBs and can figure out the environments and the galaxies these FRBs are located in if we follow them up with other telescopes," said Pragya Chawla, co-author of the paper and a PhD student at the McGill Space Institute.

Of the 10 repeating FRBs, only two have been traced back to their point of origin: one is in a dwarf galaxy and the other, in a spiral galaxy.

More FRBs may be detected

FRBs are a hot topic in the astronomical world, mostly because they're a fairly new discovery and the mechanism responsible isn't understood.

"We think we understand what's in the cosmos," Kaspi said. "But fast radio bursts were a total surprise. Nobody expected them. Nobody predicted them. Really, it was technological advancements that allowed us to see this. And I think it's really interesting that we're still learning very basic things about what's going on in the universe."

Because they release such intense energy, some theories suggest that the source is a neutron star, a small dense star left over after a supernova. Another theory suggests it could be a magnetar, a star similar to a neutron star, but with an extremely powerful magnetic field.

While the known FRBs — both the repeaters and apparent non-repeaters — are believed to originate in other galaxies, one of the newly detected ones seems to be closer than the others, perhaps even within our own galaxy. However, Chawla said that if it were to be found within our galaxy that "it would be very surprising.

"Because we know a lot of neutron stars within our own galaxy that emit such pulses, but none of them have been seen to be found that far at the edge of our galaxy."

CHIME has been quite successful in its search for these puzzling objects, but the even better news is that the telescope isn't running on full power: there's still the need to better calibrate it. Once that's done, it's expected that even more FRBs will be detected on a daily basis. And that means more data to provide other astrophysicists with the tools of unravelling their mystery.

"I think the upcoming year will be a really good one for FRBs," Kaspi said. "Are we going to know the answer in a year's time? I don't know. I don't know. Maybe. But I think we will have made significant progress in a year."