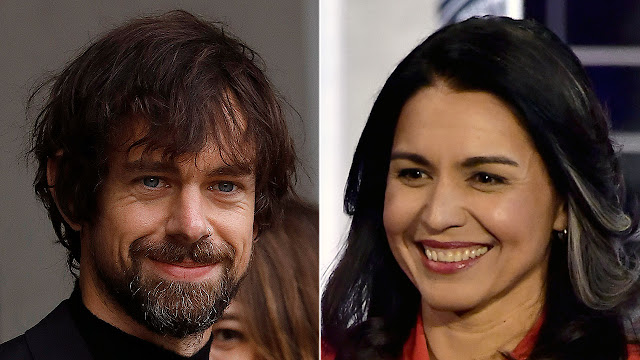 The donations were first reported on Twitter by Buzzfeed News reporter Katherine Miller, who notes that the donations came on June 27, the day after Gabbard appeared at one of the two Democratic debates. Gabbard represents Hawaii and is currently polling at 1 percent among likely Democratic primary voters.
Jack Dorsey’s political views have been somewhat of a mystery to Twitter users who often note that the Twitter CEO is reluctant to do anything to clamp down on hate speech. But Dorsey’s support for Gabbard makes sense, if only because she’s such a strange candidate. Dorsey himself is nothing if not strange.
Rep. Gabbard is full of contradictions, to say the least. She’s gotten attention for her supposed “anti-war” posturing but has also been an apologist for war criminals like Syrian President Bashar al-Assad, who has repeatedly gassed his own people with chemical attacks. Gabbard, an Iraq War veteran and current member of the National Guard, even met with Assad a couple of years ago. She also positions herself as a war hawk sometimes, depending on the issue.
“In short, when it comes to the war against terrorists, I’m a hawk,” Gabbard told the Hawaii Tribune-Herald in 2016. “When it comes to counterproductive wars of regime change, I’m a dove.”
Gabbard also claims that she’s against President Donald Trump, but believes that Trump didn’t get help from the Russian government to get elected in 2016, something that’s clearly not true if you actually read the Mueller Report.
“The Mueller Report made clear that there was no evidence of collusion,” Gabbard told The Intercept’s Glenn Greenwald back in May, a man who also believes that the Russian government didn’t help get Trump elected, despite overwhelming evidence to the contrary.
Gabbard has a strange coalition of supporters, and has gotten praise from far right internet figures like Pizzagate conspiracy theorist Mike Cernovich, Trump boot-licker Jack Posobiec, and Paul Joseph Watson from InfoWars. Mainstream conservative organizations, like the magazine National Review, have even praised her in the past. And Gabbard has been endorsed by the former head of the Ku Klux Klan, David Duke, though Gabbard has publicly refused Duke’s endorsement.
She’s such an odd duck that Gabbard was even considered for a position in Trump’s government as head of Veteran’s Affairs, though she denies even knowing about being vetted. Gabbard met with President Trump in November 2016 during the transition but insists that she was only there to discuss U.S. policy in Syria.

Dorsey, who’s reportedly worth over $5 billion, joins a weird group of supporters by throwing his weight behind Gabbard. But we’d expect nothing less from the head of Twitter. Dorsey is a very weird dude. And America as a whole is only going to get weirder as the 2020 election gets closer.