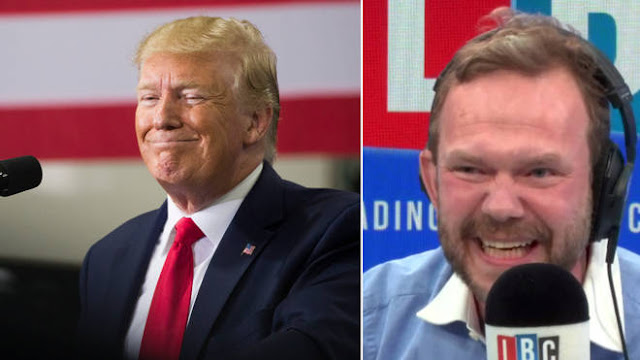 This caller told James O'Brien that the four Congresswomen who Donald Trump criticised are trying to create a socialist country. But his point fell apart when he couldn't name them or say what socialism actually is!

Stuart called into LBC when James was discussing the President's controversial tweets, in which he told four lawmakers to "go back home" to their countries, despite all being American citizens.

He insisted that the tweets were not racist and that the four - Alexandria Ocasio-Cortez, Ilhan Omar, Ayanna Pressley and Rashida Tlaib - are "hardline socialists".

After a tense opening to the call, Stuart told James: "You can't come back with anything. You're in sympathy with these women," to which James responded: "Name them."

There was a very long pause before Stuart eventually came back with: "AOC for a start" but he could only say it stood for "Alexandria Occasional-Cortex".

James told him: "So you know all about their politics, but you don't know their names. And you're on national radio having your pants pulled down."


When Stuart insisted they are all socialists, James asked him what socialism actually is.

The conversation descended into farce as Stuart accused James of patronising him.

But James told him: "Of course I'm patronising you. You're a clown. You're on national radio, condemning socialism and you've been asked many times."

Listeners loved the call, labelling it one of James's best ever!

Best call ever?
Socialism, what does it mean?
"Erm, fifth column".
Seriously?
"It condemns business whilst having an incestuous relationship with business".
Come on mate...
"That's the problem with you left wing elites, you never let people like me speak"@mrjamesob @LBC
— Error_Gen_Failure (@Error_Gen_Fail) July 16, 2019