The Great Hack: the film that goes behind the scenes of the Facebook data scandal

It’s our “matchmaker, instant fact-checker, entertainment and guardian of our memories”, but what happens when the internet, thanks to the information we feed it, turns sour? That’s the question at the heart of The Great Hack, a new Netflix documentary by Jehane Noujaim and Karim Amer.


The film focuses on the Cambridge Analytica-Facebook scandal, which became front-page news in March 2018, after the data of millions of social media users was compromised. The furore was caused by data-mining company Cambridge Analytica, after it harvested the data of up to 50 ­million Facebook users, without their ­consent, in order to influence voters in political campaigns. The companywas co-founded by former White House chief strategist Stephen Bannon, who worked on the 2016 presidential campaign for Donald Trump and the 2016 Brexit vote, both of which ­resulted in successful, and controversial, outcomes.
The complex case unravelled when an ex-Cambridge Analytica employee blew the whistle, causing Facebook’s share price to tumble by more than $100 billion (Dh367.2bn) and leading to calls for stricter ­regulation of social media companies’ use of data.

Those leading the charge against Cambridge Analytica

To help disentangle the scandal for viewers, The Great Hackfollows three individuals, including David Carroll, an associate ­professor at the Parsons School of Design in New York City, seeking to sue Cambridge Analytica, in an attempt to find out how much information the company had about him. It has been reported that the company had collected an average of 5,000 data points – or, simply put, 5,000 pieces of information – on every American voter. 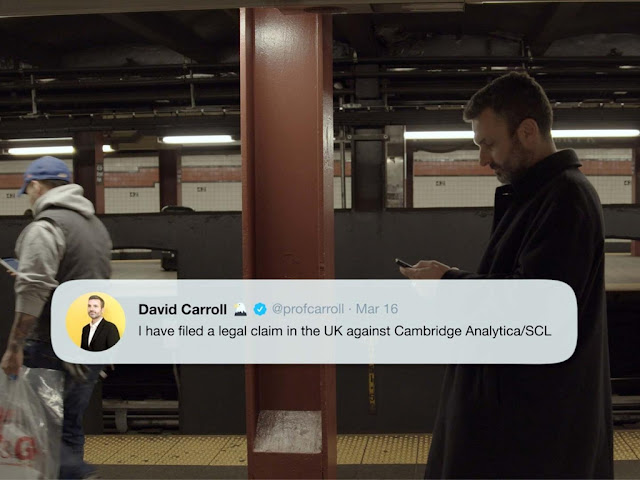 Filmmakers Noujaim and Amer, who were behind the 2013 Academy Award-nominated documentary The Square, wanted to highlight “­everyman” Carroll’s story to show how the collection of data affected the general population. “What was fascinating about him was that he was about to go on a journey,” Noujaim says. “He was getting himself a UK lawyer because in the UK, there are laws that allow you to go to companies to get your data and in the US we do not have those laws.”
Carroll talks of his fears as a father. “By the time my daughter is 18, there will be 70,000 data points on her,” he says. His profession and ability to educate without preaching allowed Noujaim and Amer to explain “the inner workings of this invisible world”, the filmmakers tell The National. “[Carroll] didn’t know where this was going to go and that he would be at the centre of this crazy story,” says Amer. “He thought it would just be this academic experiment.”
At the opposite end of the spectrum is the other leading figure in The Great Hack, Cambridge Analytica’s former business development director turned whistle-blower, Brittany Kaiser. At the peak of her career, thirty­something Kaiser held a key to Bannon’s Capitol Hill townhouse in Washington, DC, which was a centre for Bannon’s political strategising and operations. And in her twenties, she interned on the Obama presidential campaign.

A film four years in the making

While Carroll “humanised the story”, Kaiser displayed the concept of “moral flexibility”, says Noujaim.
By following those two stories, the film skilfully illuminates the way data is being mined and what happens when, as Amer puts it, “you allow for the complete commodification of our behaviour”. To borrow a line from the film, data “is the most valuable asset on Earth”, surpassing even that of oil, we are told.

"We are accepting that what connects our world is also surrendering all our data in return, by accepting these ‘free services’, the challenge now is whose balance sheet do these societal costs end up on?Karim Amer

“We are accepting that what connects our world is also surrendering all our data in return, by accepting these ‘free services’,” Amer says, adding chillingly, “the challenge now is whose balance sheet do these societal costs end up on?”

The Great Hack has been four years in the making, comprising hundreds of hours of shooting and more than a year in the editing room for the filmmakers. The film also features interviews with key people including investigative journalist Carole Cadwalladr, who broke the story. “The editing is always one of the most difficult parts of any documentary,” says Amer. However, one of the duo’s main challenges was giving form to an issue that is not particularly tangible. “It took us a long time to figure out the visual tapestry,” says Amer, connecting the aesthetics of social media and the contemporary world in cinematic form.

Will the filmmakers message be reached?

The documentary continues a journey for the filmmakers that first began with The Square, which charted the months following the Egyptian revolution of 2011.
In that instance, social media ­platforms were “used in the ­beginning as tools that were supposed to be the catalysts for democracy”, says Amer. “Social media seemed a weapon for good then, making people accountable, allowing people to go on Twitter and amplify their voices and interact with the leaders of their country – it was electrifying.”
I ask Noujaim if her behaviour online has changed since making the film. She says she has not left Facebook and believes we shouldn’t “have to make a choice to be a part of the connected world or keep our privacy and we shouldn’t have to give up all of our privacy in order to be on Facebook”. What is scary to her, though, is that, “people are picking the data they put out, giving out digital footprints that big companies are collecting … and then targeting you. This leads to a place where we think, ‘do we actually have any free will?’” 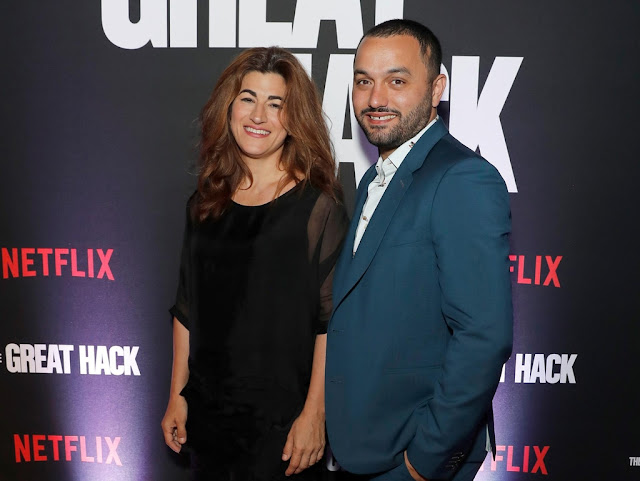 Amer has also become more aware of his digital presence, but explains “we’re always at a disadvantage because our ability to communicate what is happening to us … is affected by the fact that we’re always slower than technology”. “We are just now starting to figure out the language to talk about these things,” he says.
Noujaim and Karim hope the film will be an eye-opener for viewers. “We always say it’s not cinema or film that changes the world, but people who watch them can change the world,” says Noujaim. “This is a film that everyone who has a smartphone and lives in the modern world should watch, because it takes us on a journey through characters, rooms and worlds that we never otherwise get to see.”