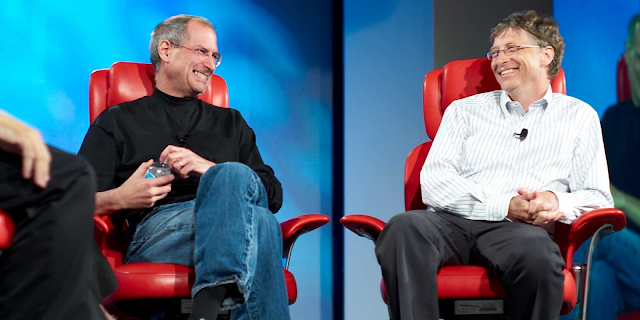 Bill Gates believes that Steve Jobs was a master of wizardry.

Speaking in a segment on leadership on CNN's "Fareed Zakaria GPS," which aired Sunday, Gates said Jobs "cast spells" and was able to "mesmerize" people.

"I was like a minor wizard because he would be casting spells, and I would see people mesmerized, but because I'm a minor wizard, the spells don't work on me," he said, according to Bloomberg, which received a transcript before the show aired.

Gates said no one could rival Jobs when it came to picking and motivating talent. Jobs also managed to captivate people with products that ultimately failed, he added.

Gates used the 1988 NeXT computer invention as an example of this. Gates said it "completely failed, it was such nonsense, and yet he mesmerized those people."

Tesla CEO Elon Musk seemed to agree with Gates. In a tweet on Sunday, Musk shared Bloomberg's story with the caption "Cat is out of the bag."

Jobs was known for being a harsh leader, and over the years there have been several accounts detailing his rudeness to workers, business partners, and even family and friends. This behavior was also mentioned in his daughter's memoirs.

But Gates said that while Jobs could be an "asshole" at times, "he brought some incredibly positive things along with that toughness."

Without Jobs, who died in 2011 from pancreatic cancer, the Apple we know today would not have existed. He was credited with saving the company from bankruptcy in the late 1990s and setting it on a path to becoming a trillion-dollar company.