When Star Wars: Galaxy’s Edge opens at Disneyland this summer and Walt Disney World this fall, it’ll give hopeful fans the opportunity to build their own lightsabers to fulfill their deepest wannabe-Skywalker fantasies, pilot the Millennium Falcon, and drink a cocktail at a wretched hive of scum and villainy. What does local intergalactic food actually taste like on Earth, though?

As we learned at a recent top-secret, photo-restricted preview hosted backstage at Disneyland Resort for a select group of media, tropical fruits, kooky chicken nuggets, and global spices star in a collection of meals and flavors never before offered at a Disney property anywhere on this planet. (This is, after all, the brand famous for selling over 3 million mouse-shaped ice cream bars each year.) Virtually every item is edible fan service: Oga’s Cantina, the long-anticipated Star Wars bar, serves up the Bloody Rancor, a twist on a Bloody Mary served with a meringue bone garnish. 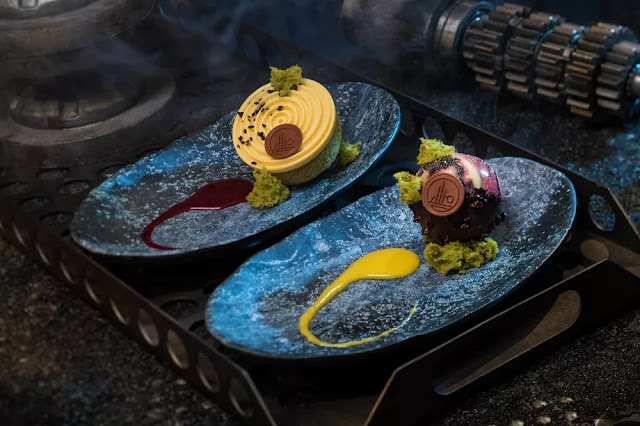 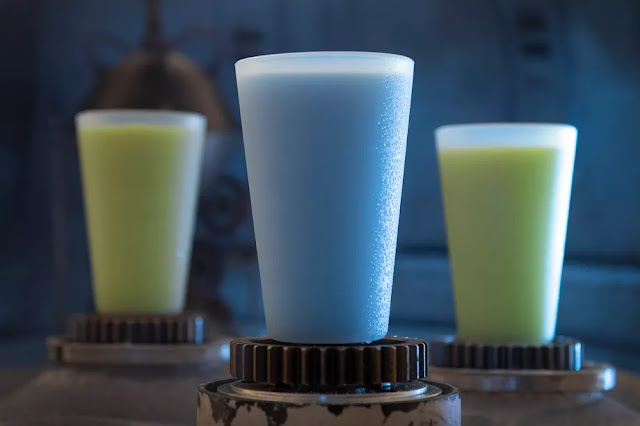 For instance, yes, you’ll be able to finally drink the iconic blue bantha milk — as well as the green milk seen in Luke Skywalker’s disturbing turn as dairy maid in The Last Jedi. Disney is going big on plant-based cuisines, with allergy-friendly foods across all of its menus, so both are non-dairy products; whether they’re almond, oat, soy, or a combination is unclear, but given that they’ll be served frozen at an outdoor stand and chilled within Oga’s Cantina, our money is on a horchata-like blend.

The Black Spire Outpost on Planet Batuu — where Star Wars Land is “located” — is intended to let fans live out their own Star Wars story in lieu of mimicking Luke Skywalker or Rey’s experiences, so the food is stylized to be like what you’d eat if, say, you ended up on an Outer Rim trading port packed with smugglers and shifty denizens. If a droid were indeed cooking your meat on a repurposed pod engine, there’s no way it wouldn’t come burnt to a crisp — which is exactly how the hand-torn, homemade turkey jerky in two flavor profiles (sweet teriyaki, spicy herb) at Ronto Roasters turned out. 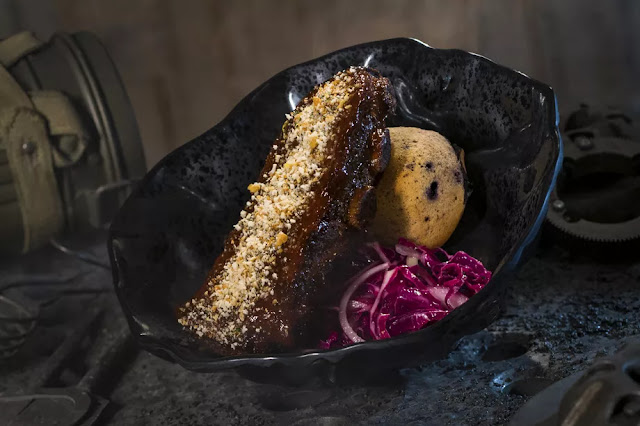 The fried Endorian tip-yip — the chicken-like birds who nested on Endor — isn’t remarkable for its herbaceous green gravy, but its specially sourced product: all-white breast meat that’s “naturally compressed” into a cubic shape, then tossed in a custom flour-based blend and egg wash and deep-fried. The sweet-sticky smoked kaadu ribs are even butchered in line with Star Wars ethos: cut in half and then sliced straight across, they’re given a specific look befitting the creature’s anatomy. And at least as the menu reads now, you can rest assured — no porgs will be harmed in the making of your lunch.

Even the best thing we ate, a green pastry whose domed shape could be a play off of Rey’s quick-rising bread, burst bright purple from its crunchy shell, served with a swath of passionfruit sauce and bits of torn green sponge reminiscent of algae. It’s human food, but when it’s done best, it feels distinctly alien.

The snacks, meals, and beverages arriving to Star Wars: Galaxy’s Edge at Disneyland and Walt Disney World pull from a global collection of cultural influences — which, given that Black Spire Outpost is a trading port on the frontier of Wild Space, makes sense. But what’s more surprising is how diners with dietary restrictions are as easily accommodated in this corner of the universe as they are within the parks. At Docking Bay 7 Food & Cargo, the main restaurant within Star Wars: Galaxy’s Edge, chef Strono “Cookie” Tuggs swapped glutinous pasta for arrowroot noodles in its yobshrimp noodle salad and opted for non-dairy olive oil mashed potatoes to be paired with fried endorian tip-yip, while kefta-spiced meatballs in the Felucian Garden Spread are made from Impossible meat. (Served atop herbed hummus with a pita and Israeli salad-like cucumber-and-tomato relish, it’s Mediterranean with a celestial twist.) Even the entree bases, like those served with a sustainable mahi-mahi, are a combination of chopped romaine, kale, quinoa, orange cauliflower, and sweet potato with a coconut curry ranch dressing. 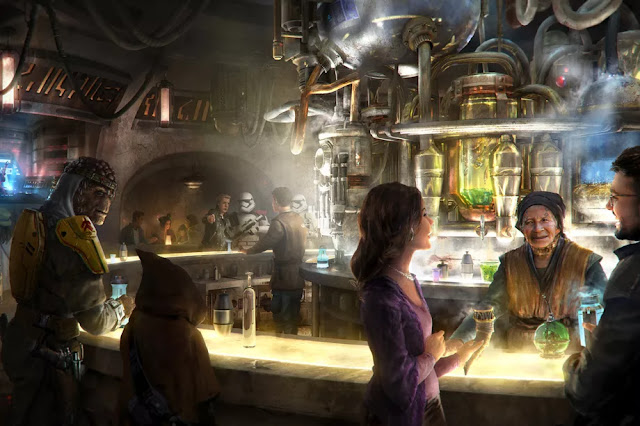 Oga’s Cantina will draw drinkers from across the galaxy 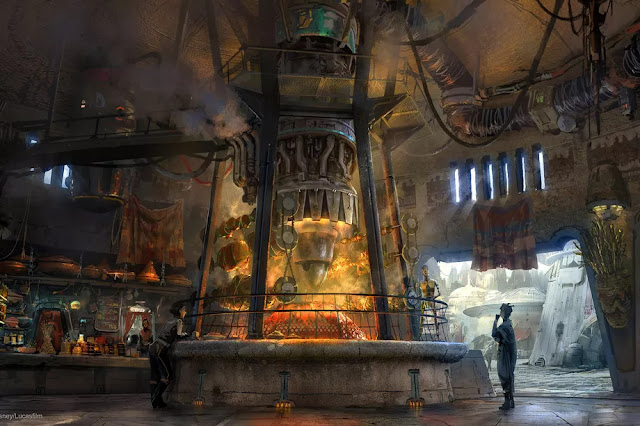 Beyond the alterna-milks, Oga’s Cantina — which will feature tunes by everyone’s favorite chatty pilot droid, DJ R-3X — will fuel your parkgoing with a caffeinated cold brew infused infused with falernum and topped with a lime. Fruit flavors, especially tropical ones, are all the rage on Batuu, where the green milk is touted as having orange blossom, tangerine, and citrus elements. Cantina cocktails also incorporate an array of citrus fruits, like yuzu and Buddha’s hand.

The bulk of flavors found throughout the menus play off a mix of sweet and spicy — a likely culinary resonance of the eternal battle between the Light and Dark sides — pulling in two or three elements to embrace umami, most apparent in the Japanese-style snack mix of seaweed senbei crackers, wasabi peas, lotus root, prawn chips, and bubu arare at Oga’s Cantina.

And, thank the Force, nearly everything on Batuu comes with a kick. Szechuan peppercorn in the “clutch sauce” of Ronto Roasters’ Portuguese hot dog, cayenne tossed into blueberry cornbread, Thai chile paste vinaigrette in the yobshrimp noodle salad; even moof juice fruit punch comes with a chipotle-pineapple hint, as flavors were specifically designed across dishes to stimulate all parts of even the most alien palates for the very first time. And if the capsaicin hit isn’t enough of a rush, a ride on Millennium Falcon: Smugglers Run with a belly full of Jabba juice and burra fish should do the trick. 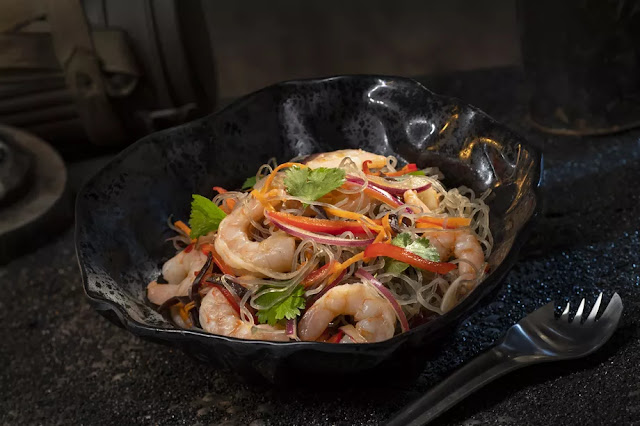